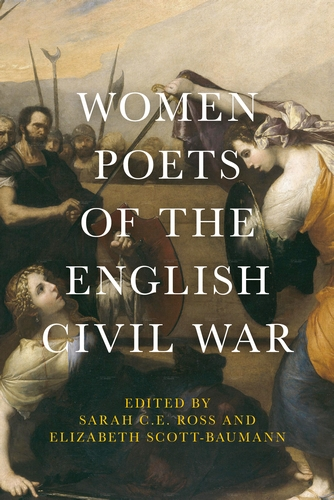 This anthology brings together extensive selections of poetry by the
five most prolific and prominent women poets of the English Civil War period:
Anne Bradstreet, Hester Pulter, Margaret Cavendish, Katherine Philips and Lucy
Hutchinson. It presents these poems in modern-spelling, clear-text versions for
classroom use, and for ready comparison to mainstream editions of male poets’
work. The anthology reveals the diversity of women’s poetry in the
mid-seventeenth century, across political affiliations and forms of
publication. Notes on the poems and an introduction explain the contexts of
Civil War, religious conflict, and scientific and literary development. The
anthology enables a more comprehensive understanding of seventeenth-century
women’s poetic culture, both in its own right and in relation to prominent male
poets such as Marvell, Milton and Dryden.

A Dialogue between Old England and New

An Elegy upon that Honourable and Renowned Knight, Sir Philip Sidney (1650)

In Honour of Du Bartas

In Honour of that High and Mighty Princess, Queen Elizabeth

David’s Lamentation for Saul and Jonathan

An Elegy upon that Honourable and Renowned Knight, Sir Philip Sidney (1678)

The Flesh and the Spirit

The Author to her Book

A Letter to her Husband, Absent upon Public Employment

In Memory of my Dear Grandchild Elizabeth Bradstreet

The Invitation into the Country, to my Dear Daughters

The Complaint of Thames

Upon the Death of my Dear and Lovely Daughter

On the Same [Tell me no more]

Upon the Imprisonment of his Sacred Majesty, that Unparalleled Prince King
Charles the First

On the Horrid Murder of that Incomparable Prince, King Charles the First

On the Same [Let none sigh more]

Dear God turn not away thy face

On the King’s Most Excellent Majesty

Must I thus ever interdicted be?

Why must I thus forever be confined

To Sir William Davenant, upon the Unspeakable Loss of the Most Conspicuous and
Chief Ornament of his Frontispiece

from the ‘Tutin’ Manuscript

To my Dearest Antenor on his Parting

A Retired Friendship, to Ardelia

Friendship’s Mysteries, to my Dearest Lucasia

Friendship in Emblem, or the Seal, to my Dearest Lucasia

from the ‘Tutin’ Manuscript, reverse

Invitation to the Country

Upon the Double Murder of King Charles I

Arion on a Dolphin, to his Majesty in his Passage into England

On the Fair Weather Just at Coronation

On the Death of the Queen of Bohemia

To the Right Honourable Alice Countess of Carbery

To Antenor, on a Paper of mine which J. Jones Threatens to Publish to Prejudice
Him

Epitaph on her Son H. P. at St Sith’s Church

Of Sense and Reason Exercised in their Different Shapes

A Dialogue between the Body and the Mind

A World Made by Atoms

Of the Subtlety of Motion

A World in an Earring

The Purchase of Poets

A Dialogue between Man and Nature

A Dialogue between an Oak and a Man Cutting him Down

The Hunting of the Hare

A Description of an Island

The Ruin of this Island

A Description of a Shepherd’s and Shepherdess’s Life

The Clasp: Of Fairies in the Brain

Upon the Funeral of my Dear Brother

To Mr Waller upon his Panegyric to the Lord Protector

2. To the Sun Shining into her Chamber

2(a). Ah! Why doth death its latest stroke delay

3. Another on the Sun Shine

7. To the Garden at Owthorpe

12. Musings in my Evening Walks at Owthorpe

20. You sons of England whose unquenched flame

from Order and Disorder

from Memoirs of the Life of the Colonel Hutchinson

All Sorts of Men