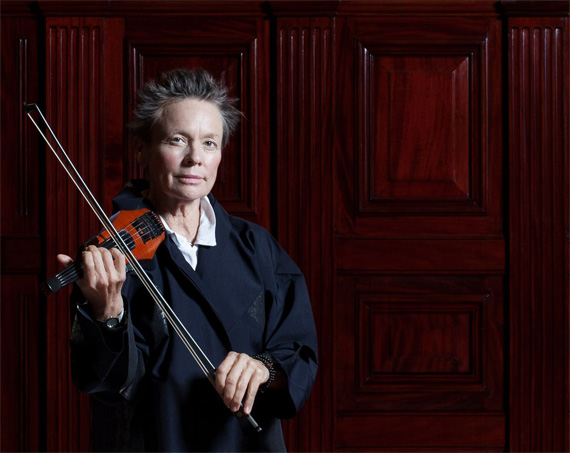 In her new work, HABEAS CORPUS (October 2–4 in the Park Avenue Armory’s Drill Hall), artist Laurie Anderson has partnered with former Guantanamo Bay detainee Mohammed el Gharani to explore the story of his seven years of being interrogated and tortured at the prison camp. The work features an installation and performances, and fuses different elements of film, sculpture, music, and video.

Since all ex-detainees from Guantanamo Bay are currently barred from entering the United States, el Gharani will appear as part of this installation live from West Africa, beamed into the Armory Drill Hall via advanced streaming techniques and three-dimensional imaging. It will be the first real-time meeting between a former detainee and American audiences.

There will be installation viewing hours from 12 p.m. to 7 p.m. and performances in the evenings by Laurie Anderson, Merrill Garbus, Shahzad Ismaily, and Omar Souleyman. During the daytime viewing hours, visitors are encouraged to use the drill hall as a place to meditate on time, identity, surveillance, and freedom. And, if visitors are so inclined, they are also welcome to use the space to actually practice meditation. “I think meditators are the people who will understand this best,” Anderson says.

You’re going to beam an image of el Gharani into the Armory’s Drill Hall? Yes. He lives in West Africa now, so he’ll be sitting in a studio there, without moving, for three days. His image will be wrapped onto a very large statue of him, the size of the Lincoln Memorial. It will be like a living statue.

The Armory’s Drill Hall is a huge, cavernous space. What we’re trying to do is create a meditation space. My dream is that groups of people will come and meditate there. I think it’s a good way to express a kind of solidarity with el Gharani.

Why do you want meditators to come? Meditators are well suited for holding the complexity of a situation like Guantanamo and making up their own minds. And meditators practice looking into delusion and it’s delusional what we’re doing. The war is delusional. The endless War on Terror is delusional. What do you do in the face of chaos and fear? It’s a big question for meditators. Do you up the security or do you try to have a more open attitude?

As a Buddhist my response is always to try to do what my teacher Mingyur Rinpoche says, which is, “try to feel sad without being sad.”

What does he mean by that? The world is filled with sadness and suffering. And if you try to push it away, you will be very unsuccessful. It will come and bite you. So you can try to accept and feel it without becoming it. I think meditators are extremely well equipped to understand el Gharani’s story.

Is his story going to be told there or is he just going to be sitting still while his image is projected onto a statue of himself? Yes, he’s going to speak. He’s going to be taking breaks—because, as every meditator knows, it’s very hard to sit for that many hours. And during those breaks we’ll go to playback where he’ll be speaking about some of his experiences. In an adjoining room, there’ll also be a film of him talking. Initially this was going to be a silent witness project, but because he’s so articulate, I thought, “Whoa, he has to speak.”

If your primary goal is telling el Gharani’s story, why didn’t you simply write it down? Is the statue, space, and music really necessary? Sometimes a giant, blue painting will give me the feeling of freedom in a more immediate way than a long essay about how to be free. As an artist, I believe in intuition and the senses. I’m afraid of rhetoric.

When you go into a big, giant, empty drill hall and you see something the size of the Lincoln Memorial that’s living and looking back at you in real time, that’s a very different confrontation than reading words on a page. And sometimes, because we’re so tapped into all of this information, we think we know stuff. But you forget to feel overwhelmed, you forget to experience things for yourself.

For me, the most inspiring teaching of the Buddha is: Don’t believe anybody, including the experts, even if they’re angels. Open your eyes and look for yourself.