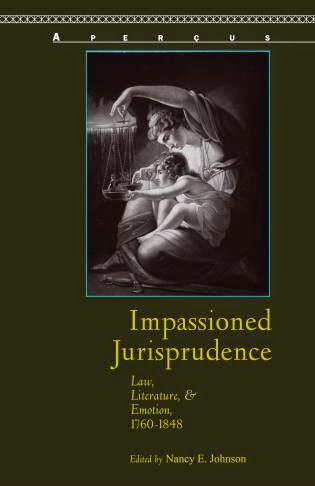 The essays in this
volume on the intersections of law and literature examine the role of the
passions in English law and legal thought at a time when modern conceptions
of jurisprudence and patterns of legislation were beginning to coalesce.
“Passions,” which were alternately construed as pathos, emotion, feeling,
sentimentalism, sensibility, and social obligation, found their way into the
legal discourse of the eighteenth and nineteenth centuries, despite claims that
rationality characterizes the law. In this collection, scholars of the law and
literature movement consider the place of the passions in legal texts and constitutional
developments, and, correspondingly, explore the engagement of literature with
legal thought to disclose the function of emotion in both the theory and
practice of the law. The historical period covered in this collection begins in
the 1760s with the publication of Sir William Blackstone’s Commentaries on
the Laws of England, the first descriptive overview and justification of
the English legal system, and ends in 1848, a year of constitutional crisis in
Britain and revolution abroad. During this span of time, in which modern
English jurisprudence is taking shape and becoming part of the public
discourse, we find a deepening reaffirmation of the role of the passions in the
law; indeed, emotion is recognized as crucial to the cohesion of a social contract
and the legal system that protects both property and liberty

— Blackstone’s legal
actors : the passions of a rational jurist

— «How like you the
eloquence of a young barrister»: love and the law in Boswell’s
development as a writer in the late 1760s

— Freedom and fetters :
nuptial law in Burney’s ‘The Wanderer’

— The madness of
sovereignty : George III and the known unknown of torture

— The great dramatist :
Macaulay and the English constitution

Nancy E. Johnsonis
associate professor of English and Chair of the English Department at the State
University of New York at New Paltz