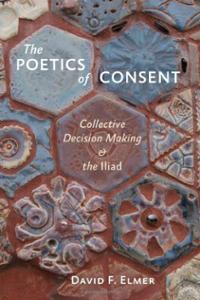 The Poetics of consent – Collective Decision Making and the Iliad

The Poetics of Consent breaks new ground in Homeric studies by interpreting the Iliad’s depictions of political action in terms of the poetic forces that shaped the Iliad itself. Arguing that consensus is a central theme of the epic, David Elmer analyzes in detail scenes in which the poem’s three political communities-Achaeans, Trojans, and Olympian gods-engage in the process of collective decision making.

These scenes reflect an awareness of the negotiation involved in reconciling rival versions of the Iliad over centuries. They also point beyond the Iliad’s world of gods and heroes to the here-and-now of the poem’s performance and reception, in which the consensus over the shape and meaning of the Iliadic tradition is continuously evolving.

Elmer synthesizes ideas and methods from literary and political theory, classical philology, anthropology, and folklore studies to construct an alternative to conventional understandings of the Iliad’s politics. The Poetics of Consent reveals the ways in which consensus and collective decision making determined the authoritative account of the Trojan War that we know as the Iliad.

David F. Elmer is associate professor of the classics at Harvard University.