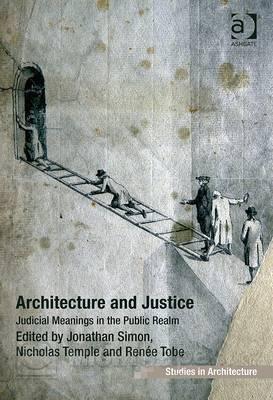 Bringing together leading scholars in the fields of criminology, international law, philosophy and architectural history and theory, this book examines the interrelationships between architecture and justice, highlighting the provocative and curiously ambiguous juncture between the two. Illustrated by a range of disparate and diverse case studies, it draws out the formal language of justice, and extends the effects that architecture has on both the place of, and the individuals subject to, justice. With its multi-disciplinary perspective, the study serves as a platform on which to debate the relationships between the ceremonial, legalistic, administrative and penal aspects of justice, and the spaces that constitute their settings.

The structure of the book develops from the particular to the universal, from local situations to the larger city, and thereby examines the role that architecture and urban space play in the deliberations of justice. At the same time, contributors to the volume remind us of the potential impact the built environment can have in undermining the proper juridical processes of a socio-political system. Hence, the book provides both wise counsel and warnings of the role of public/civic space in affirming our sense of a just or unjust society.

Penal aesthetics and the pains of imprisonment, Yvonne Jewkes

Architecture and contested space in the development if the modern prison, Helen Johnston

A simple idea in architecture: on the principles of projecting prisons, Gabriela Switek

The watchman in the vineyard: historical traces of judicial and punitive practices in Lincoln, Nicholas Temple

Back to the future? The challenge of the past for courthouses of tomorrow, Linda Mulcahy

The architecture and operation of the Imperial Chinese yamen, Peter Blundell-Jones

Gimme shelter: mass incarceration and the criminology of the housing boom, Jonathan Simon

Repurposing with a vengeance: a dance of restrained acts towards justice, Catherine Hamel

Politike Arete: or the origins of civic justice, Renée Tobe

The architecture of Lincoln cathedral and the institution of justice, John Hendrix