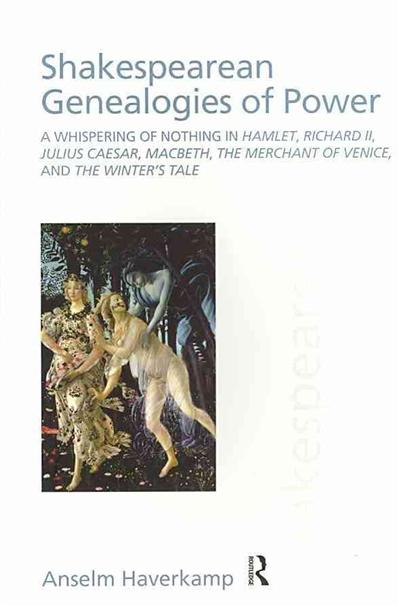 Anselm Haverkamp
Shakespearean genealogies of power: a whispering of nothing in Hamlet, Richard II, Julius Caesar, Macbeth, The merchant of Venice, and The winter’s taleRoutledge (Series: Discourses of Law), New York, 2010, 192 pp.
ISBN 13: 978-0-415-59345-8

Shakespearean Genealogies of Power proposes a new view on Shakespeare’s involvement with the legal sphere: as a visible space between the spheres of politics and law and well able to negotiate legal and political, even constitutional concerns, Shakespeare’s theatre opened up a new perspective on normativity. His plays reflect, even create, «history» in a new sense on the premises of the older conceptions of historical and legal exemplarity: examples, cases, and instances are to be reflected rather than treated as straightforwardly didactic or salvific. Thus, what comes to be recognized, reflected and acknowledged has a disowning, alienating effect, whose enduring aftermath rather than its theatrical immediacy counts and remains effective. In Shakespeare, the law gets hold of its normativity as the problematic efficacy of unsolved – or rarely ever completely solved – problems: on the stage of the theatre, the law has to cope with a mortgage of history rather than with its own success story. The exemplary interplay of critical cultural and legal theory in the twentieth-century – between Carl Schmitt and Hans Kelsen, Walter Benjamin and Ernst Kantorowicz, Hans Blumenberg and Giorgio Agamben, Robert Cover and Niklas Luhmann – found in Shakespeare’s plays its speculative instruments.

Preface – Law and Latency in Shakespeare

2 – The Ghost of History: Hamlet’s Politics of Paternity

4 – Richard II, Bracton, and the End of Political Theology

5 – The Death of a Shifter: Jupiterian History in Julius Caesar

6 – The Future of Violence: Macbeth and Machiavelli

7 – A Whispering of Nothing: The Winter’s Tale

8 – But Mercy is Above: Shylock’s Pun of a Pound

9 – Habeas Corpus: The Law’s Desire to Have the Body

The motto of the book, “But mercy is above,” is a citation from the Merchant of Venice indicating the seminal role of Shakespeare’s theatre with respect to the law. As a visible space between the spheres of politics and law – and well able to negotiate legal and political, even constitutional concerns – Shakespeare’s stage opened up a new perspective on normativity. Specifically, the Shakespearean stage offered a perspective that reflects, even creates “history” in a new sense on the premises of older conceptions of historical and legal exemplarity: examples, cases, instances are to be reflected, rather, than treated as straightforwardly didactic. Thus, what comes to be recognized, reflected, and acknowledged, has a disowning, alienating effect, whose aftermath rather than whose immediacy counts and remains effective. Hegel, who since his childhood remained a close reader of Shakespeare, found in Shakespeare’s theatre one of the sources of his philosophy of history and law including law’s role in history. At the same time, the concept of latency, of invisible schemata governing visible forms, surfaced from Francis Bacon’s essays. It captures the far-reaching performative force of Shakespeare’s mise-en-scène, the inexhaustible quality of his designs, the perpetuum mobile as a mode of theatrical exposition that seems to run forever.

The “Preface on Law, Literature and Philosophy” shows latency’s formal, technical, rhetorical – in short, functional – implications in rhetorical, technical, formal respects with the appropriate end of historical re-description. Coming to terms with a latent Shakespearean law belongs within being the latest, laconic rephrasing of what has been emphatically named the Renaissance. Hegel’s philosophy of history implies, in its uses of Shakespeare, a re-evaluation of the Renaissance as a redescription and reinscription of the modern self-conception of law and history since the Renaissance.

Overview: Genealogies of Power: Law and Legitimacy in Shakespeare traces this mode of the modern back and beyond the dead end of melancholia, which has been recognized and fought over ever since Burton’s Anatomy, and has become the central trope for all criticism after Benjamin’s Trauerspiel. The preface and the tailpiece of the book – the preface on Shakespeare and Hegel and the addendum on Habeas corpus provide a larger theoretical frame, in which the main part elaborates in 8 exemplary chapters crucial readings of law and latency in Shakespeare, from the meta-theatre of Hamlet (ch. 1-3) through the conflicts over the state and format of sovereignty in Richard II, Julius Caesar and Macbeth (ch. 4-6) to the post-political, moralistic theatre of the late Shakespeare’s Winter’s Tale and Tempest (ch. 7). The actuality of the Shakespeare machine’s insistence on Mercy’s reign above as a perpetuum mobile moving and haunting history is equivalent to, or counterbalanced by the insistence of the legal defense mechanism named Habeas Corpus in legal politics (ch. 8).

Chapter 1: “Perpetuum Mobile: Shakespeare’s Continual Renaissance“ gives a general introduction to scope and methodology of the book. Shakespeare’s stage creates a type of history of its own, resetting legal and constitutional histories. Here, Heiner Müller’s infamous „Hamlet Machine“ is dismantled, taken apart and put together again – against the premise of the natural working of violence, in the interest of its deeper seated, hidden iuridical underpinnings.

Chapter 2: “The Ghost of History: Hamlet’s Politics of Paternity” excavates in a ground-breaking new reading against the grain of Hamlet-scholarship the legal and constitutional underground of what happens in Hamlet, and how what happens in Hamlet has been sensed all along in the uncommon reception history from Nietzsche, Freud and Benjamin to Stanley Cavell, as well as how this point was categorically missed by Carl Schmitt and political activists of all quarters. Writing and staging what is latent in history is what happens in Hamlet.

Chapter 3: “Lethe’s Wharf: Wild Justice and the Purgatorial Supplement” supplements the Hamlet-syndrom with its crucial point in legal philosophy according to Hegel. The difference of revenge as “wild justice” (Bacon) and law corresponds to the difference of memory and history – the turn to memory and religion is exposed as a turn against history and law.

Chapter 4: “Richard II, Bracton, and the End of Political Theology” takes a step back in the canon of Shakespeare plays to his move against the politico-theological ideology and mystical foundation of the earlier British monarchy. Here, the Carl Schmitt debate is reset through the fundamental critique of Hans Blumenberg and supplemented by the older intuitions of Erik Peterson and Ernst Kantorowicz.

Chapert 5: „The Death of a Shifter: Jupiterian History in Julius Caesar“ asks the question what comes after the dismantled political theology of the later middle ages, particularly with respect to the British Empire’s administrative elite and newly established nobility. Julius Caesar offers the other side of the Hamlet impasse, a constitional problem that remains up to now a historically unsettled question. Foucault’s teacher Georges Dumézil as well as Michel Serres’ reading of Livy are deciphered in Shakespeare’s text. However, Shakespeare takes his own evaluation in the spirit of Tacitus vs. the modernist versions of Livy, and this Tacitean turn shall inform his further dramatical career and development from Hamlet to Macbeth on the one side, and to the Winter’s Tale and Tempest – so called Late Shakespeare – on the other side.

Chapter 6: „The Future of Violence: Macbeth and Machiavelli“ shows Macbeth as a grim caricature of Maclavellus, including Machiavelli’s exemplary use of violence. The exemplarity question with which the Tacitean turn in Julius Caesar concluded finds a new modell in Machiavelli’s influence upon Macbeth, the former law maker and reformed Prince. The political satire turns the constitutional scene into a futuristic vision of non-governmentality.

Chapter 7: „A Whispering of Nothing: The Winter’s Tale” begins with the Romantic aftermath of the Machiavellian scene, a new interest in politics in Heine’s, Marx’s and Benjamin’s rather than Carl Schmitt’s sense of an ending: “tragic humor” rather than “political Romanticism.” Late Shakespeare in general, far from withdrawing into sheer Romance, rewrites his older historical designs into intricate Romanesque examples, dramatic varieties of Montaigne’s essays, with deep-historical insights: a rewriting of Hamlet into a Winter’s Tale without Hamlet, but with a lost son. The art that had failed in vengeance does not refuse itself reconciliation: A winter’s tale?

The Tailpiece-chapters 8 and 9, „But Mercy is Above: Shylock’s Pun of a Pound“ and „Habeas Corpus: The Law’s Desire to Have the Body,” the oldest and the most recent piece of the book, indicate consequences for the legal debate on structural violence from Benjamin and Agamben to Robert Cover and Niklas Luhmann. The history and pre-history of the Habeas Corpus Act coincides with the Shakespearean archeology of power, violence, and mercy.

Anselm Haverkamp is Professor of English at New York University. He is also a Professor of Literature and Philosophy in Berlin and Munich, and has held visiting appointments at Yale University, the EHESS in Paris, and the Cardozo Law School in New York