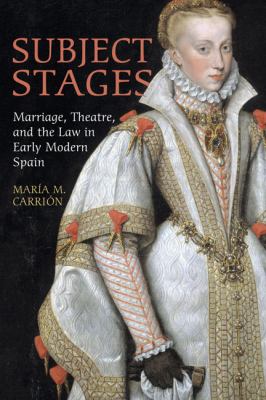 In early modern Spain, the strict definition of marriage as the union of a man and a woman of Catholic faith for the sole purpose of procreation became a key strategy in the production of Spain’s version of empire, the Universal Catholic Monarchy. María M. Carrión argues that popular Spanish theatre questioned this marital prescription by staging subjects that were strictly regulated or prohibited by the crown. Theatre audiences in Spain saw different representations of marriage: women arguing in court against marital violence, queens and noblewomen delaying or refusing imposed marriages, and queer subjects articulating radical critiques of sex and gender policing.

Subject Stages argues that the discourses and practices of marital legislation, litigation, and theatrics informed each other during this period in ways that still have a critical bearing on contemporary events in Spain, such as the legalization of divorce in 1978 and of same-sex marriage in 2005. Carrión’s comprehensive and clear analysis pulls back the facade of the ‘happily ever after’ marriage plot on stage to reveal the inner workings of the legal, economic, political, and social networks that mainstream theatre was able to critique.

Marriage Scenes in the Archives

The Birth of the Comedia and the Bride Onstage

Foundational Violence and the Drama of Honour

María Mercedes Carrión is Professor of Spanish, Religion, and Women’s Studies at Emory University. At Emory, besides the service she has rendered for the Department of Spanish and Portuguese as Honors Coordinator, Director of Undergraduate Studies and, more recently, Director of Graduate Studies, she has served as member of the Executive Council of the Graduate School, the Executive Committee of the Center for Humanistic Inquiry, the Piedmont Project, the Graduate and Undergraduate Committees in Women’s Studies, the President’s Commission on Lesbian, Gay, Bisexual, Transgender Concerns, and the College Research Council, among others. For the past three years she has served as lead scholar for the Gustafson faculty seminar. mailto:mcarrio@emory.edu

María M. Carrión was born in San Juan, Puerto Rico, and raised in Madrid, Spain, where she lived for twelve years. She studied Classics at the Universidad Complutense and graduated with a B. A. in Art History and Criticism from the University of Puerto Rico. She completed an M.S. in Art Education and an M.A. in Spanish from the University of Tennessee, Knoxville, before completing her Ph.D. in Spanish at Yale University. She specializes in the cultural and literary production from sixteenth- and seventeenth-century Spain, with a particular focus on dramatic theory and performance, legal writings and practices, and architectural theory and history. Her work also concentrates on the literature and culture of the Hispanic Caribbean, with a special interest in Puerto Rican and Cuban narratives and poetry. She has participated in conferences, symposia, colloquia, and workshops in the US, Spain, South America, and the former Yugoslavia, and her essays have been published in the US, Spain, France, and South America.She is the author of Arquitectura y cuerpo en la figura autorial de Teresa de Jesús (Anthropos, Barcelona, 1994). She has published articles in journals including Modern Language Notes, Literature Film Quarterly, Bulletin of the Comediantes, Revista de Estudios Hispánicos, and the Revista Canadiense de Estudios Hispánicos, among others. Her work has appeared as well in critical collections such as the Breve historia feminista de la literatura española (Ed. Iris Zavala and Myriam Díaz-Diocaretz. Barcelona: Anthropos, 1996), Cervantes Across the Centuries 1605-2005 (Ed. John Gabriele. Madrid: Iberoamericana-Veruvert, 2005), The Encyclopedia of Sex and Gender (Eds. Fedwa Malti-Douglas, Jamsheed Chosky, Judith Roof, and Francesca Sautman. New York: MacMillan, 2007) and, more recently, El figurón (Ed. Luciano García Lorenzo, Fundamentos, Madrid, 2007). She has written reviews and served as reader and evaluator of books and articles for numerous scholarly journals and presses such as Yale UP and Rowman & Littlefield. During the year of 2005-2006 she organized the series Spain Before Spain. Cultural Encounters Between Muslims, Jews, and Christians (1000-1700) with support from a number of groups on campus to bring to Emory seven leading scholars to speak on this topic.