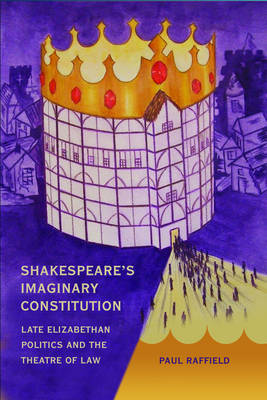 Through an examination of six plays by Shakespeare, the author presents an innovative analysis of political developments in the last decade of Elizabethan rule and their representation in poetic drama of the period. The playhouses of London in the 1590s provided a distinctive forum for discourse and dissemination of nascent political ideas. Shakespeare exploited the unique capacity of theatre to humanise contemporary debate concerning the powers of the crown and the extent to which these were limited by law. The autonomous subject of law is represented in the plays considered here as a sentient political being whose natural rights and liberties found an analogue in the narratives of common law, as recorded in juristic texts and law reports of the early modern era. Each chapter reflects a particular aspect of constitutional development in the late-Elizabethan state. These include abuse of the royal prerogative by the crown and its agents; the emergence of a politicised middle class citizenry, empowered by the ascendancy of contract law; the limitations imposed by the courts on the lawful extent of divinely ordained kingship; the natural and rational authority of unwritten lex terrae; the poetic imagination of the judiciary and its role in shaping the constitution; and the fusion of temporal and spiritual jurisdiction in the person of the monarch. The book advances original insights into the complex and agonistic relationship between theatre, politics, and law. The plays discussed offer persuasive images both of the crown’s absolutist tendencies and of alternative polities predicated upon classical and humanist principles of justice, equity, and community.

‘It is now canon in progressive U.S. legal scholarship that to focus solely on the text of our Constitution is myopic. We look as well for «constitutional moments», moments when the zeitgeist is so transformed that our fundamental legal charter changes with it. In this breathtakingly erudite book, Paul Raffield argues that the late-Elizabethan period was such a «constitutional moment» in England, a moment literally «played out» for the polity by the greatest dramatist of all time. A lawyer and a thespian, Raffield handles both legal and literary sources with exquisite care. As with the works of the Old Masters, one dwells pleasurably on each detail until their cumulative force presses one backward to see the canvas in its sudden, glorious entirety. A major achievement.’Kenji Yoshino. Chief Justice Earl Warren Professor of Constitutional Law, NYU School of Law

Paul Raffield is Associate Professor in the School of Law at the University of Warwick, Chair of Undergraduate Studies