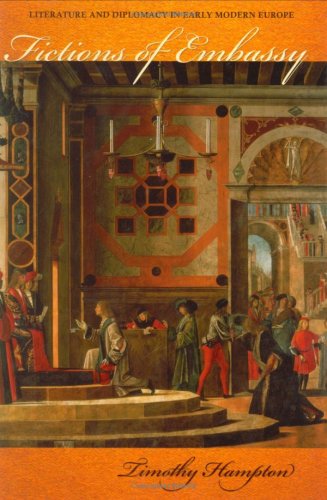 Historians of early modern Europe have long stressed how new practices of diplomacy that emerged during the period transformed European politics. Fictions of Embassy is the first book to examine the cultural implications of the rise of modern diplomacy. Ranging across two and a half centuries and half a dozen languages, Timothy Hampton opens a new perspective on the intersection of literature and politics at the dawn of modernity.

Hampton argues that literary texts-tragedies, epics, essays-use scenes of diplomatic negotiation to explore the relationship between politics and aesthetics, between the world of political rhetoric and the dynamics of literary form. The diplomatic encounter is a scene of cultural exchange and linguistic negotiation. Literary depictions of diplomacy offer occasions for reflection on the definition of genre, on the power of representation, on the limits of rhetoric, on the nature of fiction making itself. Conversely, discussions of diplomacy by jurists, political philosophers, and ambassadors deploy the tools of literary tradition to articulate new theories of political action. Hampton addresses these topics through a discussion of the major diplomatic writers between 1450 and 1700-Machiavelli, Grotius, Gentili, Guicciardini-and through detailed readings of literary works that address the same topics-works by Shakespeare, More, Rabelais, Montaigne, Tasso, Corneille, Racine, and Camoens. He demonstrates that the issues raised by diplomatic theorists helped shape the emergence of new literary forms, and that literature provides a lens through which we can learn to read the languages of diplomacy.

Introduction: angels and pimps: toward a diplomatic poetics
Words and deeds: diplomacy and humanist fiction
The useful and the honorable: the ethics of mediation in the late Renaissance
Epic and the law of nations: Tasso’s Jerusalem delivered
From Cortez to Camões: identity and authority in the discourse of discovery
Big states and small states: sovereignty, diplomatic recognition, and the theater of Pierre Corneille
Hamlet’s diplomacy: state-building, dispatch, and revenge
The tragedy of delegation: diplomatic action and tragic form in Racine’s Andromaque
Conclusion: in the Hôtel des Ambassadeurs.

“In Fictions of Embassy, Timothy Hampton integrates material from literary fiction and the historical record by examining the function of law in establishing the beginnings of modern diplomacy. His primary focus is on such central questions as the political status of the ambassador, the strategies of persuasion he employs, and his freedom to be himself rather than slavishly follow the king or state he represents. Addressing topics both political and aesthetic, particularly those created by international relations in which the norm is negotiation rather than war, Fictions of Embassy illustrates important developments in early modern statecraft.”-Constance Jordan, Claremont Graduate University.

– “Timothy Hampton is the most perceptive and erudite critic of early Modern European literature of our generation, and Fictions of Embassy is his career-defining achievement. This book argues for the rise of imaginative literature out of the practice of diplomacy. It brings together drama, epic, and philosophy, Italy, France, and Iberia. It says something new about all its texts, and, with flair and insight, it illuminates everyone from Machiavelli to Shakespeare”.

– “This book gives a highly original twist to the relation between literature and politics. What happens when early modern states exchange ambassadors in order to avoid violence? This innovative and ground-breaking inquiry shows brilliantly how literature not only represents but also shapes, and helps us to understand, the new diplomacy”.

Michel Jeanneret, The Johns Hopkins University and University of Geneva.

– “At a time of violent conquest and of centralizing monarchies, there was a world of boundaries between nations in which the arts of language flourished, a world both reflected in the epics and tragedies of the late Renaissance and early modern period and influenced by them. Timothy Hampton brilliantly opens this world of the cultural and political ‘in-between,’ the territory of the messenger, the agent, and the ambassador. Tasso, Shakespeare, Racine and many other authors appear here in a startlingly new light. This is one of those few books that substantially redefines the relationship between literature and political history”.

– “In an engaging analysis of early modern literary depictions of diplomatic negotiations, Timothy Hampton demonstrates how emerging nation-states developed novel protocols of diplomatic representation, which in turn encouraged the emergence of new literary forms. Viewing the diplomat as both a maker and an interpreter of fictions designed to cross linguistic borders, the book is a major achievement of a vigorously comparative literary criticism, and will have a deep impact in a wide range of disciplines”.

– “Fictions of Embassy is foundational for early modern literary studies: it concerns an outlook—what Timothy Hampton calls a diplomatic poetics—that is everywhere in the period but has somehow escaped a searching examination until now. Conceived by one of our most admired scholars of Renaissance literature, this book must be read by everyone in the field”.